A recent report produced by the Oxford Dendrochronology Laboratory conclusively dates the Grade I listed cottages at Piccotts End to the second half of 1527.

The main room of what was originally a traditional timber-framed hall house contains unique and historic wall paintings, whose fascinating story lay hidden for hundreds of years until their accidental discovery by Arthur Lindley in 1953 behind six layers of wallpaper.

In the row of 16th century cottages, set back from the road at Piccotts End, seven colourful panels with religious themes still exist, nearly 500 years since they were first painted. The artists are unknown, as are the reasons for their existence, but recent research by Karen Murphy can now place them in the contect of the religious turmoil in the area at the time. 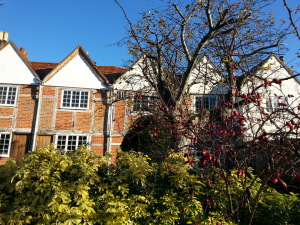 For years, the Pre-Reformation Catholic paintings lay hidden behind a sheet of coarse hand-woven linen and six subsequent layers of wallpaper, until they were discovered in 1953 by Arthur Lindley, who owned the cottages and ran a petrol station which operated on adjacent land. The seven medieval panels (from an original eight) include impressive scenes of the Baptism of Jesus, Christ in Majesty, St Catherine of Alexandria, a Pieta, St Clement , St Peter and St Margaret. They are arranged like an ‘iconostasis’, or screen with icons set in tiers and with the artwork carried out indiscriminately over plaster and timber studs; five panels along the top row and originally three panels (of which two survive) across the bottom.

We now know that the building was erected shortly after the summer of 1527, and the evidence of slight distortions of painted lines over cracks in the oak beams as they dried in situ, reveals that the paintings were executed very shortly after the property was built, before the beams had fully dried out.

They were probably only on display for a very few years due to Henry VIII's Protestant Reformation in the 1530s. Most of the faces have been carefully scratched out, which may have happened during the Reformation years, or possibly following the injunction by Edward VI in 1547 which specifically prohibited religious devotional imagery within domestic spaces. They would certainly have been concealed by this time, just as wall paintings in churches were painted over with whitewash.

Fortunately, Arthur Lindley appreciated the importance of his discovery and called in one of the leading experts of the time from the British Museum, E. CLive Rouse, who described the paintings

“The whole background is completely covered with free, running leaf scrollwork and shaded in orange-red,

grey or blue and white and with yellow fruit or flowers, the whole in a black or grey outline.”

In the centre panel is a painting of Christ in Majesty, blessing with one hand and holding the Orb in the other, with the Sacred Monogram instead of the Cross in the nimbus. On the right is the Baptism of Jesus in the river Jordan by St John, with an Archangel in the background holding Christ’s garments, since Jesus is wearing only a loin-cloth. St John is identified by the camel skin that he is wearing (the head of the camel and the hoof can clearly be seen). On the left is the Pieta (the Virgin Mary holding the dead Christ) in front of a yellow Cross. In the extreme left-hand panel is St Peter holding the keys to the Gates of Heaven, unusually depicted in his role as the first Pope, wearing the Papal Tiara and holding the Papal Staff. On the extreme right is an image of St Clement (the third successor to St Peter) with his symbol of the Anchor on each shoulder, also presented in full Papal regalia.

The nearby Monastery or College of the Bonhommes at Ashridge may be a clue to their existence, since the cottages may have been used as a pilgrims’ hospice. Ashridge was on the ‘pilgrim trail’ because it housed a supposed holy relic - a phial of the blood of Jesus - and such hospices were part of the medieval scene. The Abbey of St Albans, the shrine of the first English Christian martyr, attracted many pilgrims and it is possible that they combined a visit there with one to Ashridge, staying overnight at Piccotts End.

There is also a curious blank oblong space in the lower wall which suggests that there must have been some kind of permanent fitting here, such as an altar.

There are many unusual and mysterious signs and symbols in the paintings, relics of a time when religion was a powerful influence in people’s lives and when few could read or write. The faces have been obliterated on some of the figures, probably as a result of the Reformation. It has been suggested that there was a connection with the Cathar movement, of Southern France and adjacent areas of Catalonia and northern Italy (viewed as heresy by the Catholic Church of the time), but it has yet to be proved if this was true.

A large flower corresponds to the star in St Peter’s panel. 8 pointed star 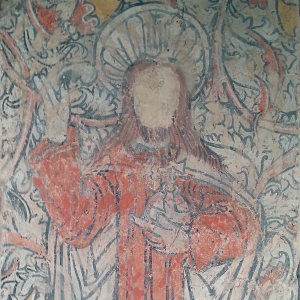 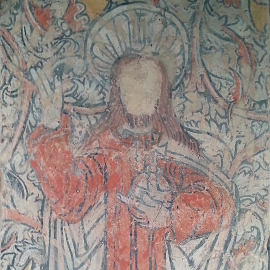 The two lower panels contain figures of St Catherine of Alexandria with her wheel and sword and St Margaret of Antioch emerging from the belly of the dragon. Their gabled head-dresses link with the early Tudor date of the paintings.

St Catherine lived in the early 4th century and was reputed to be a scholar who tried to convert the pagan Emperor Maximinus Daia. He had her imprisoned and later executed. She was condemned to death on the horrific breaking wheel, but when she touched it, the legend says it broke and so she was beheaded instead.

St Margaret is sometimes known as the patron saint of pregnant women, since she is said to have escaped from a dragon’s belly (i.e.Satan) by the strength of the Cross she carried. She was tortured and put to death in AD 304, having refused to give up her Christian beliefs and marry the Governor of the Roman Diocese of the East. 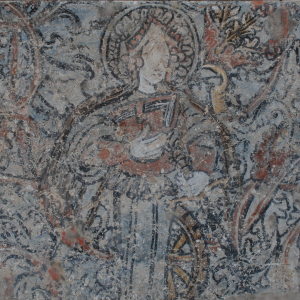 St Catherine holding a book and standing beside a Catherine Wheel 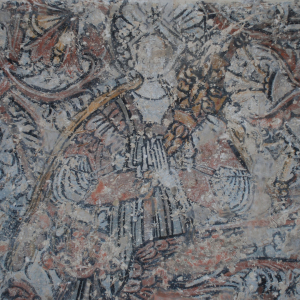 St Margaret and the Dragon

The original building was constructed of wattle and daub on a heavy oak frame with a thatched roof and a sloping ground floor made of reeds. The layout consisted of two bays with rooms above, a medieval Great Hall open to the roof and with double doors at one end, perhaps leading to kitchens.

After the Dissolution of the Monastery, the Ashridge estates reverted to the Crown. The building was converted into a Tudor house with the creation of a second floor in the old hall. Rooms were built along the entire rear of the building, inglenook fireplaces installed, the roof raised and gable ends and windows inserted – a complete new look, culminating in the conversion of the building to four cottages in the early 1700s.
Nine years after the discovery of the murals, the adjacent cottage became vacant and was found to contain an Elizabethan painted room, a priest’s hide in the gable end and a medieval well, while under the garden was part of a Tudor cobbled courtyard.

In 1825, the renowned surgeon, Sir Astley Paston Cooper, came to the district and lived at nearby Gadebridge House. He attended upon royalty and was made a baronet after removing a tumour from the head of George IV. He was so plagued by people seeking his professional help that he resolved to found the first ‘cottage hospital’ in the country on the site of these cottages at Piccotts End.
The hospital, known as the West Hertford Infirmary, opened on 1 January 1827 and the surgeons operated without the use of anaesthetics, specialising in developing new techniques for limb amputations. There was no charge for the patients – “the necessitous poor”. Cooper obtained corpses for dissection fairly openly from body-snatchers, paying them 10 guineas a body and when the body-snatchers were caught, he paid their fines.
In its third year, 35 in-patients and 426 out-patients had been treated. It served such a large area that by 1831 it had proved inadequate in size and a new West Herts Infirmary was built in Marlowes, Hemel Hempstead, opening in 1833 (now known as Cheere House).

In more recent times (2002), the cottages and adjacent Georgian house were sold to a local developer and then in 2011 the cottages were sold at auction to two private individuals, Alison Wright and Karen Murphy, who are trying to raise the funding to preserve this unique building and the paintings as a museum for the future. There is no other building like this in the country and it deserves preservation and study, to understand its purpose and its context and to interpret the symbolism of the paintings. 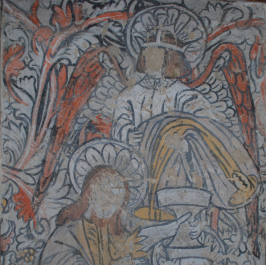